The term “chadar” meaning “blanket” is representative of the ice cover that forms over the river in the dead of winter. You will realize, on the trek, that it cannot be better described.

The Chadar Trek is a route connecting villages along the frozen Zanskar River during the winter. The route has been used for centuries for trade and transportation, and is the most reliable in February when the ice is most stable.

The Zanskar river is big and fast flowing. It is confined between a steep canyon, for the most part, between chilling and the Zanskar valley. The experience will definitely challenge one’s threshold of fear. The trek from Chilling to Zanskar valley takes more than a week. This trek is considered to be one of the most unique and exciting treks.
The Chadar trek is an endangered activity and it will cease to exist within the next 5 years. A road is being built by blasting out the rock face over the river. Once this project is completed, life of the Zanskaris will be much simplified during the winters and the Chadar trek will turn into an ancient local practice.

Join us on this dream journey, which is a time capsule of sorts, that will take you back to simpler times. 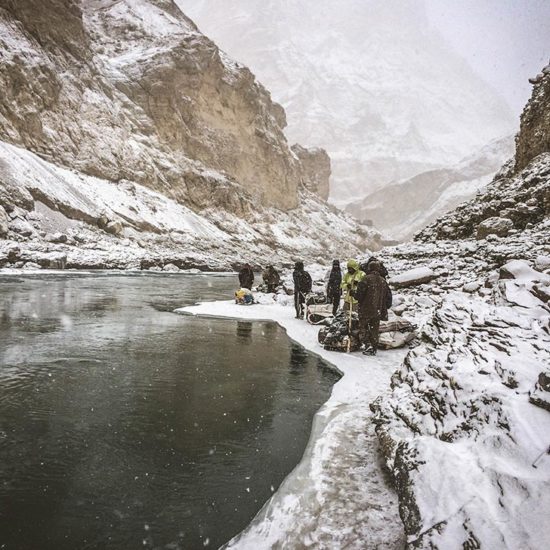 Day 9: Trek from Shingra Kongma to Tilad Do and drive to Leh

Transport: Meals: Accommodation: Equipment: Medical Services: Staff: Permits:
Cost Excludes:
Mountain Ethics Equipment & Safety Creating “Shared Value”
GET YOUR ADVENTURE TRIP INSURED We have now partnered with India’s first Adventure Insurance provider www.asc360.com to make your trek safer. For an additional one time amount of Rs 988/- get will get a cover of over 3.5 Lakhs for your 10 day trip. Please let us know if you are interested so that we can send you more details. We strongly recommend signing up for it. Please note that we are not charging any additional service fee on this. The policy rates are as per ASC360. You can also get your insurance directly by contacting them.   What to carry? Fine Print & Trip Specific Important Information:   By signing up for a trip with Roots, you acknowledge that you have voluntarily applied to participate in this trip and that you have read the description of the trip as it appears on the website and the information below: 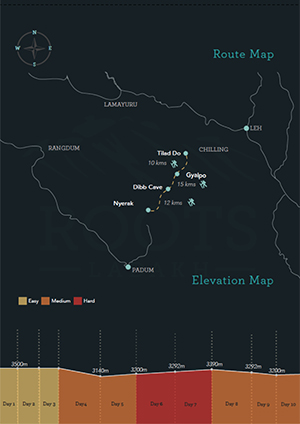